I read a book this year that convicted my heart more than any other (non-Bible) book that I've read in recent memory. I've been chewing on it for two months, and have been trying to figure out a way to share it... but I've struggled to put effectively into words what's been on my heart, so I haven't...
However, seeing the story floating around about this most recent shooting in a church in Texas has stirred up my heart again... so bear with me as I try to work some of these emotions, experiences, and thoughts into intelligible sentences...
I have just spent these last 3 days with a dear Afghan friend who became a follower of Jesus last year on Christmas day.
At several points during his visit, we talked about his home country.
We talked about the war that's going on there.
We talked about the dangers for followers of Jesus there.
We talked about how hard life is there...
But we also talked about how hopeful we are for what Jesus wants to do there.
We talked about how Jesus wants to bring renewal and restoration to the whole country of Afghanistan, the same way He has brought renewal and restoration to our own hearts and lives.
During one of these conversations, we read the first few verses of Isaiah 2 and Micah 4 together.
Slightly paraphrased:

They will beat their swords into plowshares and their spears into pruning hooks.

Nation will not take up sword against nation,

Nor will they study war anymore.

After we read it, we celebrated together the fact that, according to Isaiah and Micah, God is going to bring peace to Afghanistan.

Scripture tells us that a very real and very tangible day is coming when Afghans will not train for war anymore.

How beautiful and stunning is that!

Isaiah paints the picture of weapons like swords and spears being turned into farming tools like plows and pruning hooks… like tanks being re-purposed into tractors, missiles turned into aquaponic farms, and guns turned into shovels and rakes.

For in a people and a region where war and destruction has been the nonstop default since 1979… well… just imagine how refreshing peace like that sounds.

Back to the book I mentioned: Months ago, I read about a group who works in some very violence-prone inner cities in the US. They were so sick of seeing shootings happen on their streets (sometimes, literally on their front porches), and so convicted by the peace promised/commanded in verses like Isaiah 2:4 and Micah 4:3, that they decided to just start taking it literally. They started an organization that takes guns - assault rifles, pistols, etc. - and using blacksmithing techniques, turns them into gardening tools.

Many of the weapons they work with have been used at some point to take the life of another person - whether from shootings, or from suicides, or just from accidents that happened as a result of having a gun in the house.

Here’s a short video of their story:

When I read about the prophetic/declarative acts these men and women were doing - taking tools designed to bring death and turning them into tools to bring life - it struck my heart so deeply.

I found out that a couple of the guys had written a book, so I ordered it and read it….

As I read it, I had such a wide ranging array of emotions… there’s these poetic sections, just talking about what God has in store for His kids and for the world… There’s these history sections, where it explains how we got to where we are globally as far as gun violence is concerned…. There’s a section where they go in and do a super cursory glance/analysis of western culture, and show just how interwoven violence is to our very culture itself, in many ways that we don’t even recognise on a day-to-day basis…. and all through the book, they share stories of people who have lost their lives to gun violence over the years.

Reading it, I felt so many different emotions. Hope, despair, anger, compassion, judgement, mercy… and most impactfully, a LOT of personal conviction.

I realised that, even though I am asking Jesus for and believing for peace for these countries that my friends come from, there’s parts of my life that are lived completely contrary to that.

While I am asking Jesus to end wars in Syria, Yemen, and Afghanistan, I also play games and enjoy entertainment that glorify war.

Whether that be playing Call of Duty, or watching John Wick, or whatever it is… I’ve been partaking in a culture that is anti-Christ.

Jesus is the Prince of Peace. He told His followers that those who live by the sword, will die by the sword. He told us to turn the other cheek, and to love our enemies and pray for those who are hostile towards us.

Because they’re created in His beautiful, amazing, valuable image.

Yet, the culture that I’ve grown up in and been ok with all my life makes games, jokes, and all types of entertainment out of that stuff.

I mean, I love Star Wars, but that literally has the word “War” in its name.

Yet, Jesus came to put an end to war.

So, where does that leave us?

The truth is… I don’t know.

There’s a line in the book which I almost cried when I read… I’ve shown it to half a dozen people, and it hits my heart every time I read it. It goes:

“Transformation requires hope—and hope changes the one who hopes.

Think about a pregnant mother. She doesn’t just passively wait for the baby. She waits actively. She prepares. She gets the crib ready, prepares the room, eats healthy, sleeps well.

And so it is with those of us who want to be midwives of a new and better world.

If we believe swords are going to be converted to plows, it makes less and less sense to keep making swords.

If we really believe the prophets were right and that this is what is coming, then we can’t help but begin enacting it now.

And I’m inelegantly walking/stumbling, trying to figure out how to do that.

I don’t have the answers… But I’m looking for them.

What has that meant for me? Again, still figuring it out.

If I believe that the future coming is a time when we’re not going to learn war anymore, it doesn’t make sense for me to “learn” it now… so, after playing many, many evening games of Call of Duty with my friends over the last couple years, I’ve now deleted it, and most other “war based” games from all my devices…

We ain’t going to study war no more…

That being said, I also watched the new Star Wars last week (and loved it for the most part… in spite of the violence).

I don’t have this figured out. I’m not yet walking in the fullness of what I want to see, or what I believe Jesus wants for me… But I’m going after it!

I want to be a “midwife of a new and better world”.

I want to adjust my life now, to be ready for the future that I know is coming.

My heart hurts at that.

Am I thankful that the gunner didn’t kill more people? absolutely… But 3 people are still dead. And based on my Facebook feed, it feels like people are treating that as a victory.

I morn for those killed in the church.

I also morn for the shooter - a man whom Jesus loved and died for. A son, created for more than that.

And I morn for the guard, who has to now live with having killed a man.

No matter how I look at it, I can’t see this as a time to praise guns.

Tonight I stood out on my balcony and watched the fireworks ringing in the new decade. It’s an hour and a half after midnight here, and I can still hear them going off.

As I watched and listened to the cracks of the fireworks, I also couldn’t help but “hear” the sounds of tanks and rifles firing in those bright, colorful sparks and explosions in the sky.

That makes me want to scream.

Why are we ok with that.

I don’t want to be either.

Can I challenge you to hold up your view on guns/violence to Jesus?

In the light of His presence, does your way of thinking hold up?

Mine didn’t. I thought it would… but it really didn’t.

And honestly, I’m not sure if it does yet…

But, I’m so thankful that He’s so gracious. He takes us where we’re at and always draws us closer to His image. So don’t be afraid to bring it before Him.

I have been, and will continue to be.

If you’re interested in reading the book I mentioned, you can find out how to get it here: 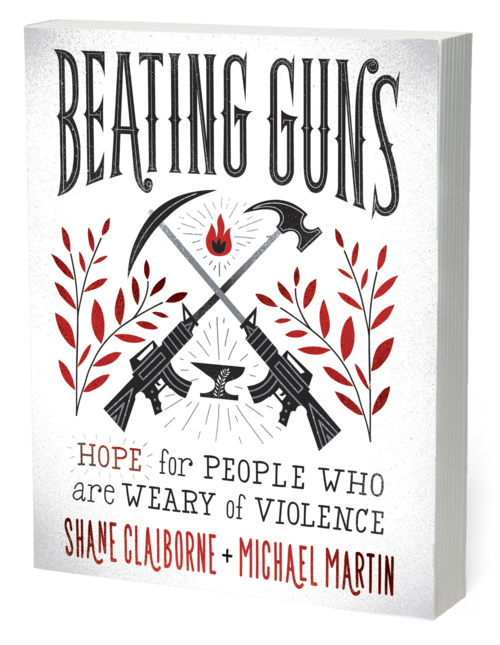 https://www.beatingguns.com
Thanks for your grace in reading my ramblings.